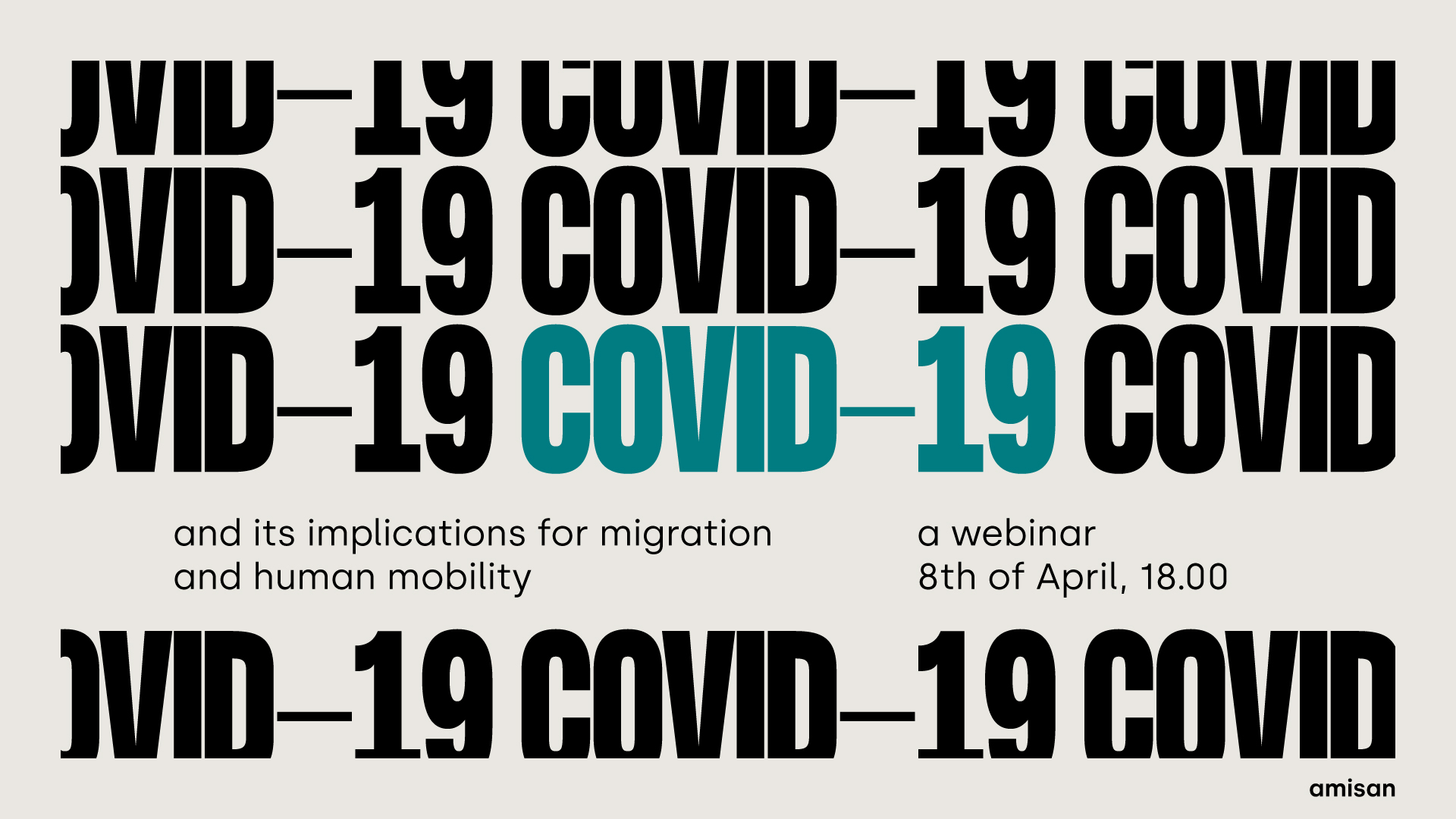 Amisan, the alumni network for the University of Copenhagen’s Master in Advanced Migration Studies (AMIS), launched this webinar series to fulfil two aims. One was to facilitate a focused social event during the COVID-19 quarantine period for all those affiliated with AMIS, and the other was to discuss various examples of how the pandemic is impacting migrant and refugee settings. The objective was to foster a productive, discursive space, bringing topics and issues to the fore that would be interesting to AMIS staff and students, and to brainstorm how we could proceed after the webinar with initiatives related to COVID-19 and migration.

During the first hour of the webinar, we heard presentations on five different migration-related situations and contexts, from amisan board members and AMIS students and staff.

Owen Savage, a second-year AMIS student, presented his research on how COVID-19 is affecting Wolt delivery drivers. The vast majority of these drivers are migrants living in Denmark on temporary visas, often without other regular employment. Even as the delivery economy has faced a boom in demand, the mobile nature of Wolt drivers is causing both an increasing perception of them as a public health risk, and an insecurity amongst the drivers about the health risks they themselves are facing. Furthermore, in times of COVID-19 Wolt drivers and riders, along with other delivery people, become more visible on the empty streets of Copenhagen. In response to all this uncertainty, Wolt has provided a “rescue package” for their drivers who are unable to work due to illness. This “rescue package” which offers a discount on hand sanitizer for Wolt drivers, is inadequate, and also has the express condition that the drivers must prove themselves to be infected with COVID-19 in order to receive the benefits offered through the package. The precariousness of Wolt drivers’ employment has been highlighted by COVID-19. Because they are self-employed by the company, with no protection against unfair dismissal or compensation during illness, there has been internal debate amongst Wolt drivers about how to address the situation. Luka Frey, AMIS graduate and amisan’s Branding and Platform Development Chair, gave the case (during his presentation at the webinar) of a group of former delivery drivers in Barcelona who were in this same precarious employment arrangement as Wolt drivers. This group took collective action and formed their own company after several attempts to form unions with their former employer. Their new company guarantees greater employment security for its drivers and is a good example of how collectively, individuals can make positive changes within the same kind of employment framework.

Maria Kennedy, a second-year AMIS student and amisan’s Administrative Chair, then brought the conversation to Moria Refugee Camp on the Greek island of Lesbos. The nearly 20,000 asylum seekers currently living in the squalid conditions of this camp are facing the devastating implications of a COVID-19 outbreak in a camp with no reliable electricity, makeshifts shelters, a severe lack of medical resources, intense overcrowding and further restrictions by the Greek government of access to the camp by medical professionals. These restrictions include banning movement out of the camp between 19:00 and 7:00 each night, and only letting medical visits occur between 16:00 and 23:00. Additional risks are posed by the fact that 42% of the inhabitants are underage children, and that social distancing is simply impossible. Meanwhile, because of President Erdogan of Turkey’s recent opening of borders, hundreds more people are arriving on the island each day. In response to the situation on Lesbos, the NGO Sea-Watch, which has been working tirelessly to save migrants crossing the Mediterranean since 2014, has proposed sending decommissioned cruise ships currently docked around the Greek isles to evacuate the camps in Greece. These ships are fully outfitted with medical facilities, provide ample space for social distancing, and offer much better living conditions than Moria. This idea is also a challenge to the EU and its lackluster response to the desperate conditions of Moria camp.

Sarah Emory, second year AMIS student and amisan’s Board President, rounded up the “student-led” portion of the webinar with a presentation on how COVID-19 is further threatening the already vulnerable Venezuelan population, both within and external to the country, with a specific focus on the Colombian border. Since the total collapse of the Venezuelan economy and political system, up to 6 million Venezuelans have fled the country, with almost 2 million of them crossing into Colombia. While the pandemic looms, Venezuelans in the country barely have water to wash their hands with, have completely insufficient supplies of food, and have limited access to hospitals which often lack soap and which continue to face regular rolling blackouts. One estimate claims that there are a mere 200 ICU beds in the entire country. Meanwhile, on March 14th, the Colombian president Ivan Duque closed Colombia’s border with Venezuela. Due to this closure, the already tumultuous scenes at the Colombian border crossings are sure to deteriorate, as Venezuelans desperate for any means of survival will be forced to turn increasingly to the irregular, dangerous backroad tracks criss-crossing the region. At the same time, Venezuelans already in Colombia and other countries in South America have little access to health care, and suffer from growing xenophobia. Undoubtedly, as COVID-19 continues to unfold and the prioritization of taking care of Colombian lives over lives of “others” (such as Venezuelans), continues, it will be Venezuelan lives at risk.

Following these presentations, amisan invited our affiliate, AMIS associate professor Zachary Whyte, and AMIS post-doc Cecilie Odgaard Jakobson to present on their work in the Danish asylum context. Cecilie has been conducting research in an asylum centre in Southern Jutland, and explained how, for the migrant men in the centre, COVID-19 has done little to change their daily lives, except further isolate through further visitation restrictions. Due to the socially isolating circumstances of their detention in this centre, the realities of quarantine are nothing new, and can in fact potentially be a blessing in disguise for some of them, as the processing of asylum cases has been temporarily halted and the future of deportations to home countries is unclear. The theme of how different states are responding to the public health threat of COVID-19 in relation to restrictive migration policies was then picked up by Zachary. Even though information is somewhat muddled at the moment, it appears that while some states, like Portugal, are granting amnesty to irregular migrants in light of the pandemic, other states, like the United States for example, are continuing with arrests and deportations. In many instances, there is no guarantee that irregular migrants who come forward to get tested will not then be detained and scheduled for deportation, an example of what Zachary referred to as “migration politics trumping public health concerns”.

Amisan initiated the discussion period by highlighting two main themes present in each of the presentations:

Some excellent questions were then posed by the audience, furthering the points brought up in the presentations.

Our next webinar will be the evening of Wednesday, April 29th. For this webinar, we ask that everyone who attends considers the following action points, and comes to the webinar with some thoughts or ideas:

— back to the events page